Guess who came to town… 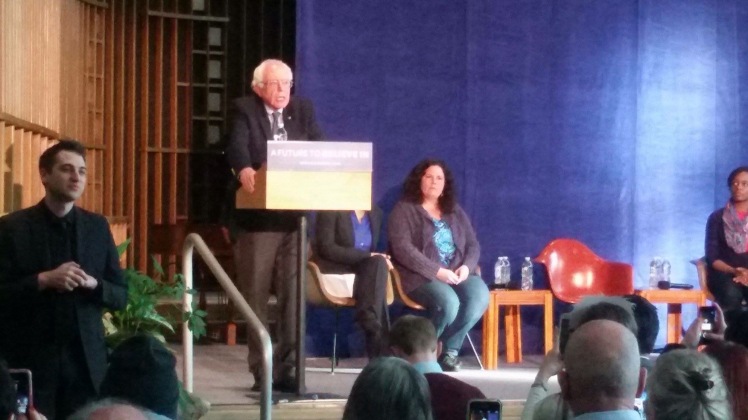 The day after a blizzard that dumped about 10 inches of snow on Flint, my lovely nephew called me and said, “hey…want to go to a community meeting and hear Bernie Sanders?”

I was pulling out my coat and boots before I even hung up the phone.

So we went–
Bernie Sanders came onstage to wild applause but he held up his hands and quieted the audience. He said that it was not a political rally– that he was in Flint because he had met with a group of residents two weeks prior and was so shocked by what he had heard that he wanted a larger forum to gather testimony and clarify needs.

He asked questions. One by one audience members rose to the mike and told their stories. Soon I forgot that Senator Sanders was onstage because I was shaken by the testimony that I heard from Flint residents who had basically been poisoned by contaminated water flowing into their homes and who were told over and over again that the water was fine.

I won’t even go into the fuckery that has taken place at all levels of government during this crisis. (I’m  writing on an iPad and it’s awkward).

We have been told that there are other cities with rotten infrastructure and no funds.

Flint is a warning shot across the bow.

4 thoughts on “More From The Crooked Road”