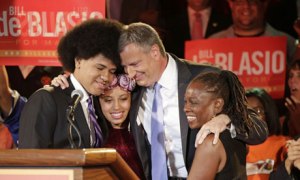 I first met Bill DeBlasio when I was living in Washington, D.C. in the 1980’s. We were both involved with the alliance to stop intervention in El Salvador and Nicaragua and we went to many demonstrations and alliance meetings together. Bill was the mobilizer and community builder and he was the person who made the phone calls and brought everyone together… for demonstrations…for letter writing campaigns…for political campaign work and for softball games!! Yes. I played in a league with Bill and I was HORRIBLE. I complained the whole time. Yet he never scolded me or tired of me. He patted me on the back and encouraged me and cheered me on even when I struck out. We had to come up with a name for our team, and so we put ourselves on the roster as “The Peace Train.” When the secretary returned the schedule of games, he made a type-o and our team was hence named, “The Peach Train.”

That was back in the 80’s. Bill was a New York City transplant doing political work down in D.C. and he missed NYC in a big way. He loved every inch of that great city and so it was no surprise to me when he bugged out of D.C. and landed safely back in the city that he knew as home.

Me? Well. I was in love with a young man who also a transplanted New Yorker and so when he got a job up there I followed him along, trying to salvage a dying relationship.

We broke up within about four weeks of my moving to New York and I found myself in Bill’s living room, sobbing and broken-hearted. “What am I going to do now, Bill?” I asked forlornly.

“Are you nuts? You’re in the greatest city on earth!” Bill said.

I stopped blubbering, blinked a few times, and then “Oh yeahhhhh. Actually, I kind of like it here. Maybe I’ll stay!” (Perhaps it didn’t go EXACTLY like that but that’s the essence of it…)

I lived in New York for the next twelve years and I loved every minute of it. I stayed in touch with Bill off and on and sometimes, when political action called, I would run into Bill at a demonstration or at a campaign event. He worked in the Mayor’s office way back in the early 90’s and that’s when he began to cut his teeth in New York City politics. God bless him.

I’ve hesitated about writing this post. The name-dropping feels unsavory.

It’s just that I’m so darned proud of my old friend, Bill. He is truly one of the nicest people I’ve ever known and he’s got a heart of gold. I don’t know many people like him. He’s smart. He’s funny. He loves people and has worked tirelessly, all of his life, for social justice and human rights. He put up with me when I was at my worst and he treated me, and everyone, with great compassion.

And now he’s the Mayor of New York.

Well played, my friend. And thanks for the memories.