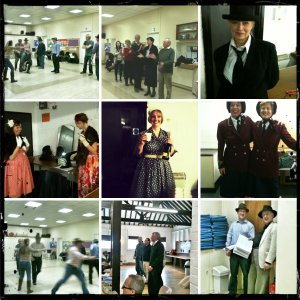 Things I learned from my week at the theatre:

– You lose all sense of modesty. Costumes have to be changed often and quickly and some cast members even have to undress in the green room while the cast is coming on and off the stage. The men’s and women’s dressing rooms are not necessarily off limits to members of the opposite sex if you’ve lost a hat and need it quickly or a prop has gone missing. And nobody bats an eye.

People have asked me if I’m going to feel let down once the show is finished but I don’t think I will.  It was extremely fun but it’s now time for me to resume normal life and I’m ready for that.  I’ve got a few business matters to take care of and a little dog who is desperate for my undivided attention.  Oh… and a bingo game to organize for some little girls who are serious about winning some great bingo prizes (fresh out of the storage box in the spare bedroom…)