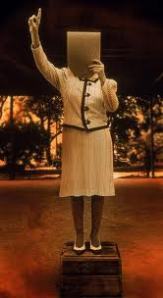 I haven’t had a rant in awhile and now I want to say something about the major corporations who use loopholes to dodge taxes and those billionaires who donate 30 million dollars to Republican political campaigns.

Here’s a graphic that shows how much a billion dollars is: 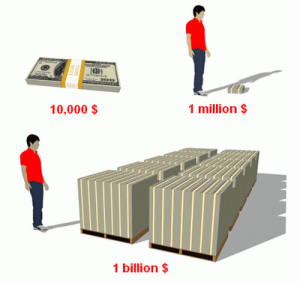 So when you hear that Amazon only paid 1.8 million in taxes but made profits of 3.35 billion, you can see how little in taxes they actually paid. And let’s not forget Starbucks, who paid nothing in UK taxes but made 10.7 billion in profits. Or how about that Sheldon Adelson fella, who donated 33 million dollars to Republican campaigns in the United States…but his net worth is estimated at 25 billion dollars. This man has so much money that 33 million dollars is a drop in the bucket to him.

Let’s keep this in mind the next time we hear our political leaders and our corporatist masters tell us that “we’re all in this together”. Or, as President Obama has said about the spooky, scary Fiscal Cliff negotiations…”we all have skin in the game.” We aren’t and we don’t. The middle class, the working poor, the elderly and those on fixed incomes are forever going to pay the price and suffer far more than the upper echelons of society and the gap between the rich and poor will continue to widen.

Everything about this cheeses me off.  I am currently trying to find sponsors for our local, community theatre and do you think that any major corporation (those who have stores in Farnham) will contribute even £40 towards this community effort?  No.  It’s the local small businesses who are digging into their pockets to support our community.

I am ending this rant to ask that we all make an effort to support our local small businesses.  When you meet up for a coffee…how about stopping at a locally owned coffee shop?  Want to buy a book online?  Try  HERE or HERE (for the UK).

It’s a small thing, but it’s a place to start.