When Andy asked me to marry him — and after I said yes — one of the first things he said was, “now we have to figure out how to get the cats over here.” I knew he was a keeper.

Shipping animals from the U.S. to the U.K. is no easy feat. It involves micro-chipping, blood titers (but only from specified labs) and lots of paperwork that must be filled out absolutely correctly right down to black ink and block capital letters.

Then we had to put the cats in a crate and off they went into the cargo hold of a noisy jet. I probably worried more about them than I did my own transition from New York City to an English village.

The cats arrived in England before I did and when AP brought them home, they refused to come out of their crate. He left them to settle in and went to bed. When he got up the next morning, the cats were nowhere to be found. It wasn’t until he opened the cupboard doors that he found them and he snapped this photo and sent it to me with the following caption:

“Fitted cats. Every kitchen should have them.” 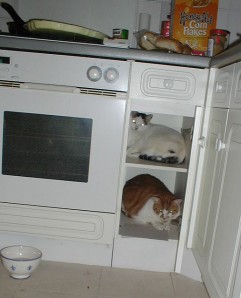 They lived in the cupboard for about a week and then one night, when they saw me on the floor, they came out and began purring and cuddled with me… all was forgiven. And just like that, they made the transition. I wish it had been that easy for me!