(The Welsh flag)
Today is the first day of the Chinese New Year. It is the year of the dragon.

When I came up with a name for my blog and Etsy store, Dragonlane came to me because it is a place in Devon that I love. Actually, it’s the name of a road in a small village in the middle of Devon and I am charmed whenever I go there, partly because a dear friend lives on that road, but also because I love the beauty of the place and the sense of community that is prevalent in the local village. The village pub is aptly named, The Green Dragon:

Dragons loom large in English and Welsh folklore and they represent deep primordial powers. They are a paradox, symbolizing our dual natures: creation and destruction; light and dark; male and female. They are, in and of themselves, neither bad nor good – and can be used for acts of greatness or great evil. The ancient Druids emphasized positive aspects of the Dragon, while Christians used the dragon symbol, seen as the serpent, as a vector of chaos and destruction.

So happy New Year – and go embrace your inner dragon. 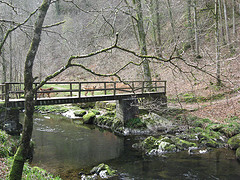 (From a walk in Devon)

4 thoughts on “Year of the Dragon”